This is a short rant on Virtual Reality as seen by some people in Hollywood. First, by "Hollywood", I mean the general community of movie directors and producers that have their story to tell and you WILL watch it. They seem to believe that "Reality" means sitting a watching. You don't get to explore, you don't get to push buttons or pull levers, throw the ball, swing a stick, or jump off the roof. Everything that you can do in real life and probably did as a kid. I'm beginning to think they have gotten old already. 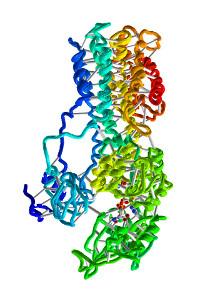 Smart phones and tablets with recent releases of Chrome, Firefox, Safari, or Internet Explorer can display 3D models from the Web. These devices also have internal sensors that tell the browser about its orientation.

Not all mobile devices and browsers correctly report the device orientation. According the the World Wide Web Consortium (W3C) Working Draft 1 from December 2011 "DeviceOrientation Event Specification" the orientation is given by three angles representing compass direction (α), tilt (β), and rotation (γ). The 0 values for these is with the device flat, screen up, pointed North.

Maya is used for a lot of 3D modeling. Modelers frequently save their completed work in a FBX file. FBX is a proprietary format designed by Autodesk (check this). In addition to the model, it contains the textures, rigging, and animation. It is a very convieient format, if you have an appropriate library of other tool to unpack it. Blender is an open-source modeling program. There is an FBX importer in Blender that handles many of the features and variations of the FBX format.

"Creating 3D Scenes for the Browser", a presention to Digital Designers Los Angeles and Digital Media Artists Los Angeles on 20 Jan 2015. The PDF of the presentation with slides and notes is available. This is the final version.

The presentation focuses on the capabilities and reasons for using X3D for Serious VR & 3D graphics .

Getting X3D to display on your webpage is very simple. The simpliest example can be accomplished in three easy steps. These are summarized as

Net Neutrality is showing up as one of the top stories shortly after the 2014 elections. It is not an easy topic to understand, especially with all of the claims and counter-claims flying around the Internet. Many of the statements are made by people who have no idea what is involved but are taking their position purely for political or personal financial reasosns. This post is an attempt to explain in relatively simple terms what is involved in Net Neutrality by using familiar analogies.

In a previous post I showed how a scene could be displayed in a browser and viewed stereoscopicly with Google Cardboard. This post describes a more efficient means of creating the display. In both cases, the browser screen is split in half with slightly different viewpoints so the eyes/brain combination views the result with depth.

This post expands on the presentation titled "Driving the Evolution of the 3D Web". The code is include plus active links to the demos and examples.